“Unreasonable haste is the direct road to error.”

At a speedy pace Blaine walked down the hallway, the door to the main gala hall falling shut behind him, and suddenly the noise became nothing but a dull roar, leaving his ears to ring, when the door was opened again behind him.

While still walking, he half-turned right as it was falling shut again to see who was behind him and saw none other than Heath.

“Kid, I am on my way to the pisser while I still can, I have to go on stage soon. Can this wait till after? I not, it needs to be a REALLY quick word” Blaine’s tone was pressing.

“Now please and I’ll be very quick. Blaine, I just wanted to make sure that you know that I love your daughter very much, have loved her for a very long …”

“HEATH! That’s the opposite of quick. Land the plane or we’ll be standing in a big fat stinky puddle and I’ll have to go accept an award wearing pissed in pants!”

“Sorry, right, straight to the point. I would like to propose to Caitlin and wanted to know if that is all right with you.”

“NO! Of course not! I just want to level up. We won’t have to get married right away. It can wait a year or so.”

“Oh, how generous. Married at 20. Every father’s dream. You know what? Sure, if it’s my blessing you’re after, you got it. Caitlin does what Caitlin wants anyway, and we both know she wants you. Writing’s been on the wall for over a decade, I knew this was on the horizon right after you had moved in with us, both of you still innocent little kids, but it was right around your first Christmas with us where it already dawned on me. The way you stared at Cait as if she was your best present ever and never left her side since, a blind man could see this coming. But news to me was that we still ask prospective fathers-in-law for the hand in marriage. Thought that custom died a long time ago. If it didn’t, I owe old Caleb an apology, retroactively. Whoopsie.”

“Honestly, I don’t know how current that custom is, for me it’s more a matter of utmost respect for you, it just felt like the proper thing to do.” Heath shrugged.

“Right. We’re all about fuckin’ proper in this family. Fine, I need to properly relieve myself now, so I don’t turn into an involuntary sprinkler system up on that stage when they give me another dust collector or two. Ok, do me a favor, go tell Scarlett your intentions. If she’s cool with it, then knock yourself out proposing to our Caitlin Rose.”

“Ok, I will, but please keep this between us. I want it to be a surprise. For Cait, I mean. I am still trying to figure out the perfect proposal in my head.”

Blaine had already started to walk off, was waving back at Heath to signal he understood without turning around, then disappeared in the men’s room.

“That went smoother than expected. All right, now on to find Scarlett.” Heath mumbled to himself.

Heath was able to pull her aside when she went for a refill on her champagne, Scarlett was surprised, a bit taken aback, but told him she had no issue with his intentions.

Encouraged and elated, but utterly distracted, Heath missed most of the Starlight Accolades awards gala, including several of the Camerons receiving awards again.

After the event Heath and Caitlin decided to not stay overnight at the Cameron Mansion as they usually would, but port back to Forgotten Hollow. After arriving at the front door of Grainger Hall, their new home together, Heath grabbed her hand when she wanted to turn to walk inside.

“Walk with me.” Heath smiled.

“Now? In my gown? Can I at least go change?” Caitlin giggled, as did Heath when he shook his head.

“Come …” the way he smiled when he said it, melted Caitlin’s doubts, she smiled back at him and followed.

After they entered Vatore Park, near the fountain, Heath stopped her and pulled her to face him, holding both her hands in his.

“Right here … this very spot was the first time anybody ever really saw me. You SAW me. In this here spot, my entire life changed many years ago. Because of you.”

“Oh … you mean after grandpa stuck me with you to show you around Forgotten Hollow … even though I am not a local and barely knew anything here except the main plaza. Yeah, I remember. We were both 8 or 9 and I kept wanting to get you to take a bus out of here with me, but you freaked out so bad. You had barely said a word to me until we got here to the park, just stared at me with those gorgeous purple eyes, but then I finally got you to talk to me, still what came out of you was weird stuff. You were such a strange cookie.” (re-read that chapter here CLICK) 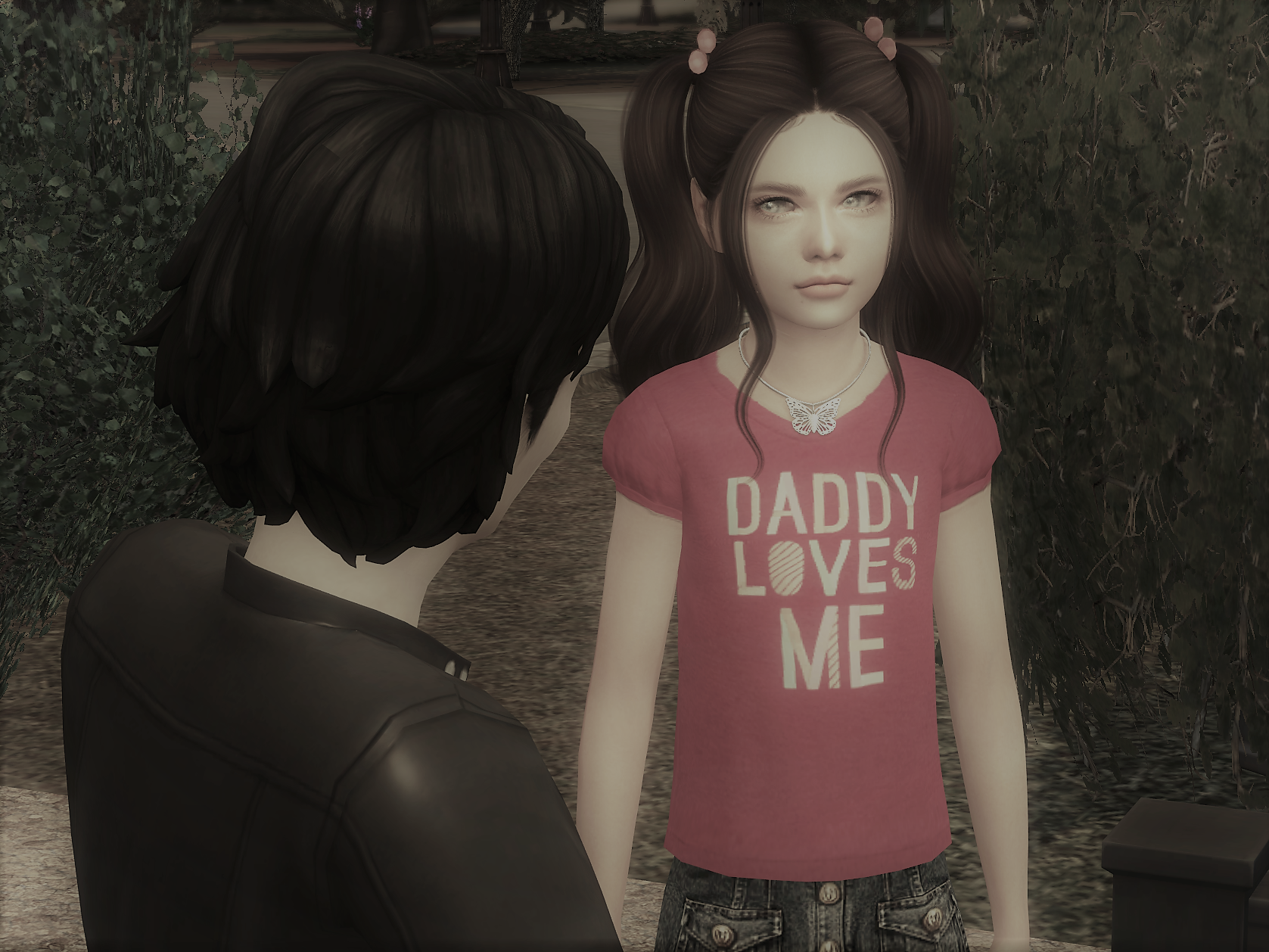 “Yeah, I was, still am. And I thought you were just the most unusual, precious thing I had ever seen, so full of life, even though you were like me, yet you were nothing like me at all. I said a lot of crazy things, things my father had told me, the way he used to condition me to be like him, and you just taught me the right way better than anyone could. I could understand you and you understood me. Above all, I heard you because I wanted to hear you. You were my crutch then, and eventually became part of me.”

“Wow. That is the creepiest, yet sweetest thing I have ever heard.”

“Cait, I love you. Something once upon a time I never thought I was even capable of, back when my father was still alive. I didn’t really feel anything back then, except maybe my primal urges. Feed, rest, hide. You taught me that being a vampire doesn’t have to equal being dead inside and emotionless. You opened a whole new world to me, then, and now. I hardly recognize myself sometimes, in a good way.”

“Aww, you are so sweet! But reality is that we taught each other a lot of things. We had a lot of firsts with each other. I guess it goes both ways with the opening of new worlds.”

“Caitlin there is something else I wanted to …”

Heath was interrupted by loud cracking of branches and rattling of leaves in the thick shrubs just a few dozen yards ahead of them, quickly, he stepped in front of Caitlin to shield her from whatever animal might emerge from the bushes, even though she was, like him, a vampire.

Instead of a furry, four-legged creature, a pair of two-legged ones appeared.

“Oh shit … sorry guys. Didn’t mean to ruin the rom-com moment here but we need to get out of these shrubs, poking into every crevice, or they’re gonna have to buy us dinner.” chuckled a tall, tan young man with an athletic build and bright blue eyes who half-turned to assist his female companion, a fair-skinned, dark ashy blonde with deep ocean blue eyes. KC McCoy and Annaleigh Vatore.

“What the heck are you two doing creeping around the vegetation at Vatore Park?” Caitlin asked.

“He he he … you get three guesses, Caity Cait.” snickered KC.

“Oh my gawd, that is … why? You live literally right there Annaleigh!” Cait pointed at the house only a few hundred yards from them.

“Not to mention their two pet wolves that keep thinking ‘dinner’ every time they see me. I can’t even go to the bathroom at her place without her seeing me to the door or those two ‘hyenas’ are tying on bibs and start drooling.”

“Oh KC, they are not that bad. They just need to get to know you better, wolves aren’t domesticated dogs who instantly love everybody. They take longer to warm up to new people …. and how could they not love you? Besides, I drool a little every time I see you, my gorgeous hunk.” smiled Annaleigh up at the tall young man with that telltale glazed-over eyes kinda smile young lovers have.

“Wait a second! So … does this mean you two are … official?!” asked Caitlin, her eyes-wide, mouth open.

“Yes Ma’am, sure does! Don’t get no more official than us. We already did the whole sniffing each other’s parents’ butts thing, Anna was invited and attended my lil sis Juliette’s 18th birthday party. We’re working on getting the two sets of parents and siblings together so they can get to know each other … the whole nine yards.”

“Wow. And your sister is 18 now? Glad I was invited to that milestone. So much for friends again.” Caitlin pouted slightly.

“Cait … no offense, but we just recently became friends again and you still don’t even know my sister. It was her birthday, not mine, I cannot just invite strangers to that. Plus, her boyfriend was there, obviously, and he is Giacomo Auditore. If memory serves, you had a little something-something with him at some point too.” KC told her.

“Did not! Went out ONCE, and only because he literally ambushed me to ask me for a date outside Blake’s home with my entire family watching. Heath was there. Tell him!”

“See Caitie Cait? Just thought that would have been 50 shades of uncomfortable, especially for him. Wasn’t MY birthday. You both will definitely be invited to that, if you want.”

“Do we stink or why are you trying to get rid of us so urgently now?” KC grinned at him.

“No. Cait and I were just having a moment … ALONE.” Heath told him.

“Bruh, you two live together, you don’t really need much sleep, you can have tons of moments alone. No need to try to compliment us away so rudely. I – for one – am kinda happy to run into you, since I have one of those rare weekends off and Cait and I have a lot of catching up to do to patch this friendship up. Since I don’t exactly live down the street, occasion for that is rare.” KC rolled his eyes at Heath.

“He’s right. Hey, do you both wanna come over and have a drink at our home? Just hang out, chill, talk, catch up? We just got back from the Starlight Accolade awards, my dad won again big time, as did Viv, Blake, Mila and 2Dark 2C. Your brother pulled some really funny stuff, Anna, I GOTTA tell you what Colton did on stage!” Caitlin offered excitedly, Heath only moved his mouth like a fish underwater. What?

Three of them turned to walk to Grainger Hall, leaving a frustrated looking Heath in their wake, who followed them after a big sigh, while his hand played with the little box that had been burning a hole in his pocked all night.

“Well, maybe some other time … like Blaine pointed out, there’s no rush, I guess, and if Cait and I have one thing in abundance, it’s time.” he sighed before he followed them.